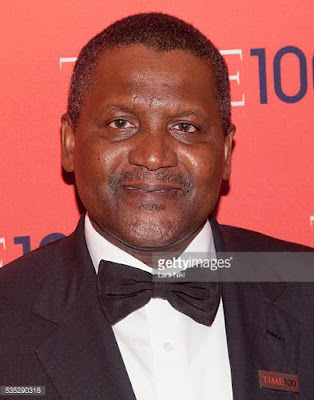 For the 7th time in a row, Nigerian born business tycoon, Aliko Dangote has been named the richest man in Africa (and also the richest black man alive) by Forbes magazine.

The business tycoon whose main source of income is from his manufacturing of cement, has also diversified into fertilizer and oil.

The other Nigerian man on the list is the publicity shy, media and Oil tycoon, Mike Adenuga. He is estimated to be worth $5.3B.

Only two women made the list this year; Angola's Isabel dos Santos, the daughter of Angola’s longtime former president, Jose Eduardo dos Santos; said to be worth $2.7B and Nigeria’s oil tycoon, Folorunsho Alakija, whose is estimated  to be worth $1.6 billion.