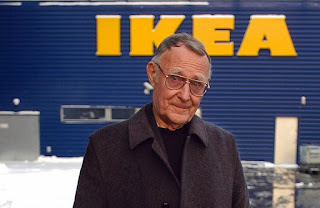 Founder, Ikea, Ingvar Kamprad is dead. He died at the age of 91 in Sweden.

The entrepreneur delved into the world of
business at an early age; selling matchbox to neighbours in Sweden. He soon found out that he could make more profit by buying them cheaply from Stockholm, and sell them at a low price.

With modest financial backing from his dad, he however began Ikea when he was 17-years-old,selling watches, Christmas decorations and office stationary which he sold from his home, but started selling furniture in 1950. The company only became popular in 1956, when it pioneered minimalist, flat back design.

In order to avoid Sweden's high tax rate, he moved to Switzerland, where he lived for decades. He however moved back to Sweden in 2013, after his wife's death.

The Ikea group now has 403 stores across every continent, employs 190,000 people worldwide and generates annual sales of 38 billion euros.

Kamprad, who was one of the most powerful men in Europe, stepped down from the board of  the holding company of Ikea. His last son, however took over as chairman.

Despite his enormous wealth, the business man is said to have lived a very simple life while alive. He reportedly wore clothes only from thrift stores, drove an ageing Volvo, and even used his supermarket loyalty card in order to save money.