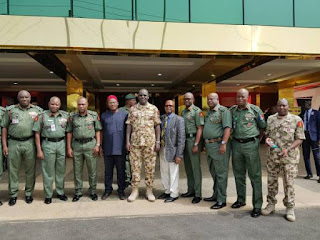 
The meeting which took place on January 2nd 2018, is meant to seal the partnership deal the Nigerian army entered with the company for the provision and repairs of military fighting vehicles and hardware.

The company is expected to provide military gears, engines and the immediate supply of 100 vehicles.

They are also expected to identify requirements for the production of the armoured fighting vehicles in Nigerian Army Central Workshop in Kaduna.


According to the Chief of Army Staff, Lieutenant General TY Buratai ….


“The Nigerian Army being patriotic and in a bid to encourage local entrepreneurs asked Innoson Motors to supply 3 vehicles early last year which were found to be durable and performing very well as they were employed in combat and proved to be useful, comfortable and convenient in military operations. Based on that the Nigerian Army acquired over 70 more variants of the Innoson vehicles which were deployed in the North East for Operation LAFIYA DOLE.”


On his part, The chairman, Innoson Company, Dr Innocent Chukwuma expressed optimism over the deal and commended the Chief of Army Staff for patronising a made in Nigeria brand. He also promised to assist the Nigerian Army resuscitate its Special Vehicle Plant and Workshops.